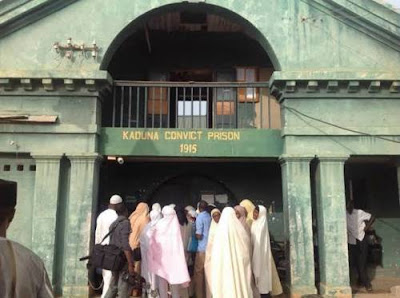 The Centre for Anti-Corruption and Open Leadership, CACOL has chastised the Kaduna state prison officials for their wanton murder of 8 inmates of the Kaduna correctional centre who staged a protest that turned into a riot over fears that they could contract Coronavirus (COVID-19) and die due to the overcrowded nature of cells and poor ventilation system in the facility.


In a release issued by the Coordinator, Media and Publications, Adegboyega Otunuga, it says:

“Since the unfortunate outbreak of the coronavirus that recorded its first confirmed case in Nigeria on 27 February, 2020, with over 200 affected persons and 4 deaths and both federal and state governments proclaiming a lockdown in order to curtail the global pandemic;  Nigerians have expressed one form of disenchantment or the other as it concerns their fears of helplessness during the rampart social disorder.

This includes those that are variously detained or imprisoned in different correctional centres across the country.

It is known that one of the most dangerous avenues for the contagious virus to be easily transmitted against humans is through crowding and congestion.

Unfortunately, this has been the hallmark of virtually all prison facilities in the country, most of which were built before the country attained its independence on October 1, 1960.
In most cases, an average correctional centre (prison) built for 500 inmates some decades ago, comprise of over 2,000 inmates today (over 400 percent increase) with more than 70 percent of such inmates falling under awaiting trial inmates (ATM) meaning that many of them were simply arrested at different locations or framed up on holding charge and kept perpetually under a most unbearable condition for ridiculous numbers of years.


“This is why CACOL, as a civil society organization with bias for rights enforcement, has always advocated decongestion of our prison centres through abrogation of ‘Holding Charge’ from our law jurisprudence and acceleration of access to the wheel of justice for all inmates under awaiting trial.

More often than not, allowances for these inmates fall below acceptable standard with feeding and living conditions barely fit for human pets. This is why we could effectively relate and reckon with the grievances of these inmates, some of whom were murdered in cold-blood.

They include, Hammed Abdullahi, Lucky Ugokama, Ibrahim Abukabar aka Baba Lolo, Yahu Salisu, Elvis Wisdom Adekpe, Lucky Njoku, Oluchukwu Oche also known as ‘No Witch’, and Ibrahim Abdullahi, while Ogume Osifo Osarome is in critical condition after being severely tortured, according to an online medium, SAHARA REPORTERS, for simply demanding safety over their lives.

Consequently, we demand for the setting up of an impartial panel of probe and investigation of both immediate and remote causes of the murder of these unfortunate inmates, who remain innocent of all charges until otherwise proven and some of who still retain their fundamental human rights as veritable members of the human community even when convicted, as guaranteed by provisions of the Geneva Convention and the 1999 Nigerian Constitution (as amended).

“In similar vein, we lend our critical voice to the point of awareness over rights abuses and impassioned violations by different security arms of government since lockdowns were announced in some states of the federation as rightly exposed by a foremost rights group, Amnesty International (AI).

It is our candid view that the current situation that was imposed by the unfortunate coronavirus pandemic, calls for sober appraisal and review of how we had fared as a nation, prior to the symbolic national independence and after. What is more desirable and urgently required for us as a nation bound under One Destiny is fostering unity and love, which could only be attained by the social reorientation and redirection of our security architecture and sociology”


According to the CACOL helmsman, Mr. Debo Adeniran, “The occasion of this global pandemic, though sad and unfortunate, offers us an only opportunity to refocus this nation and salvage it from its age-long path to perdition that makes its teeming compatriots to hibernate between hopelessness and disillusionment, thereby jeopardizing a fulfillment of its remarkable possibilities that should make it take its rightful place amongst nations.”