Showing posts from September 6, 2019
Show All 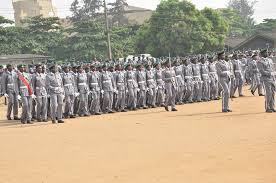 The death has been announced of Ex-Customs officer popularly known as Shine-Shine in the Apapa Customs Command.

Shine-Shine worked with Nigeria Customs Service until his retirement.

He was however said to be indulged in consistent drunkenness, sipping down every drop of liquor, drinking to stupor and making a fool of himself.

This became an embarrassment and eye-sore to the Command.

Sources claim that prior to his passing, kind hearted Nigerians had contributed a large sum of money for him and asked him to relocate back to his hometown instead of leading the destitute life of sleeping in the long room (Customs office).

He actually received the money left for his state but came back again just after a few months.

The deceased family however remain aloof about his death. They have asked the Apapa Command to carry on with the burial arrangements in the way and manner it deems fit.

The officer in charge of the arrangement, pleading anonymity, has given directives to the family to officia…
Post a comment
Read more
More posts