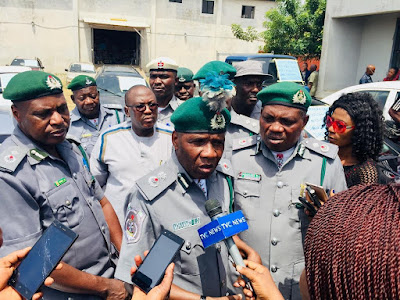 Sandra Ukele
TheSeme Area Command of the Nigerian Customs Service has eulogized its efforts in increasing revenue collection, combating smuggling, facilitation of legitimate trade and improvement of community service. This was said in a Press Conference held in the border region recently.
The Command under the leadership of Customs Area Commander Comptroller Mohammed Garba has generated the sum of N1,260,684,226.91 in revenue collection. It has similarly witnessed the various interception and eventual seizures of various goods, machineries and drugs. The items range from Tramadol to Cannabis, bags of foreign rice, fairly used vehicles, bags of sugar, cans of vegetable oil to mention a few. The grand total of all seizures and revenue accrued is N1,475,050,377.91.
On a recent encounter, a Renault Megane car 2017 model bearing a diplomatic and Nigerian plate number concurrently was intercepted by officers of the Seme Command.
Speaking on event, CAC Garba said:
“It was just yesterday that the d…
Post a Comment
Read more
More posts