October 30, 2019
The Nigeria Customs Service Tin-Can  Island Ports has showcased the seizures made by the Command in the light of the land border closure. 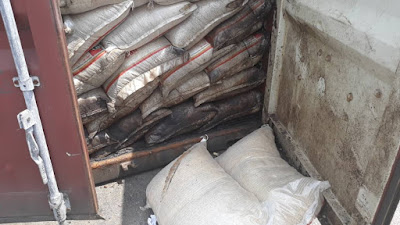 The Comptroller General of Customs Col. Hameed Ali (rtd)  expressed satisfaction at the achievements of the Command. In his words:

“One of the significant findings about this seizure is that all the rice is expired  or about to expire,” he said.

Meanwhile, insider reports reaching us it is alleged that the so called expired rice was imported in 2014 by Mr. Uche Ogar in anticipation of his governorship elections campaign in Abia State.

Mr. Ogar’s consignment did not arrive it’s destination as the bags of rice were seized by the Nigeria Customs Service. 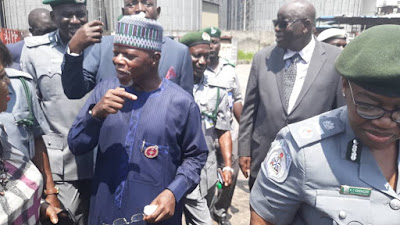 The CG of Customs Col. Ali in appreciation of the work carried out by his men iterated:
“The Nigeria Customs Service is leading other security agencies in a joint operations code named, “EX Swift Response” being coordinated by the Office of the National Security Adviser (ONSA).

“The Nigeria Customs Service, Nigeria Immigration Service in collaboration with the Armed Forces of Nigeria, The Nigeria Police Force and operatives of the Intelligence Agencies are effectively ensuring the on-going partial closure of the nation’s land border.”
The CG stressed that:

“Realizing that there may be possible backlash to the closure of the land borders, I directed all seaports and airports to beef up their surveillance and intercept any illicit and prohibited consignment for which attempt for their smuggling may be made through these entry points.”