The 5th Women In Journalism conference kicked off with the theme, “Action Journalism: Women on the Frontlines.”
The annual summit held with a line-up of speakers particularly Anna Cunningham a former BBC reporter turned multimedia freelance correspondent.

Anna had worked in Afghanistan making a documentary on the Taliban, she covered extensively the 2014 Chibok school girls attack and kidnap. 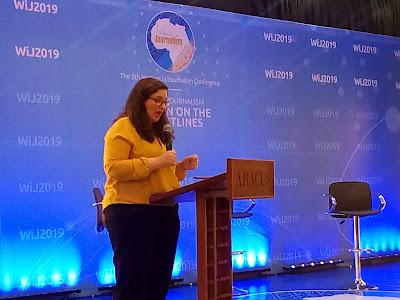 “If you go back times and years and you try to cast the image of, 'there you are in the Frontlines, battle line with the good guys with a big microphone in front of the camera with mortars melting over your head and you are doing your thing. And that’s what people think Frontline reporting is. But you know it is not now.

“The Frontlines is anywhere,” she says.

Anna outlines the dangers that have increased, the risks of female journalists notwithstanding.

The freelance broadcaster decried the decrease in access to battle-line areas, stressing:

“It’s been really difficult to enter facts.” 'Why?' “ Because you simply cannot get the access, You can’t get into these areas. You have to get military permission.”

She reminisces on the 2014 Chibok School Girls attack, iterating,

“I remember in back in 2014 I had a lot of conversation with Editors in Toronto, the CBC news of where we would go and how we would report the conflict and of course post the Chibok school girls story. And that really hit the world stage. It was a big focus on Nigeria.”

According to her, people wanted to get more. But that was, if you wanted to get entry you had to get military permission. And that wasn’t happening. It was a big issue.

In determining the risks of Frontline reporting, Anna Cunningham affirms,
“You would measure the risk of kidnap and the risk of suicide bombers.”