September 08, 2019
The Managing Director of the Nigerian Ports Authority [NPA] Hadiza Bala Usman has reiterated management 's commitment in recognizing the efforts of its workforce who have contributed positively over the years in the area of optimal dedication and a high level of professionalism through improved welfare in its quest to attaining hub status within Africa, South of the Sahara. 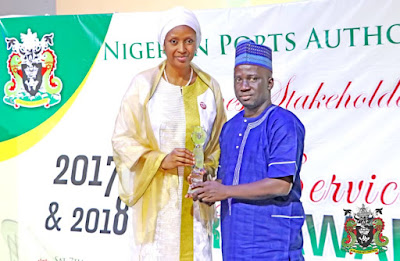 The  NPA Chief Executive made this remark on the occasion of the year 2017/2018 Long Service/Merit Award Ceremony of the Authority held at the Eko Hotel and Suites, Victoria Island, Lagos.
She stated that Management was willing and would strive at improving the welfare of the staff
and further motivate them to work harder in all spheres towards the sustainability and realization of reforms embarked to meeting International best practice in the competitive environment.
‘’Management considers putting In place a well-motivated workforce with the requisite character, competence and capacity to optimize our rich Maritime endowment towards the sustainability of the reforms we have undertaken so far’’ 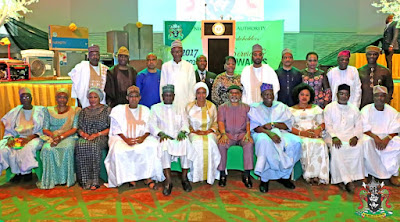 “Without this the sustainability of the reforms we have undertaken so far as well as the audacious goals we poised to achieve as enunciated in the 25 year development plan would remain unattainable”
In his remark, the Secretary to the Government of the Federation Mr Boss Mustapha represented by the Hon. Minister for Trade and Development, Otunba Adeniyi Adebayo while commending the Board and Management of the NPA for putting together the Award ceremony stated that the event goes to show the high premium the Authority places on its human resource which has paid dividend across board especially within the Maritime sector.
According to him, the event could not have come at a better time as it falls in line with the Agenda of the President Muhammadu Buhari’s administration which’’ prioritizes on the welfare of its workers regardless of whether they are still in service or retired’’. He charged the Awardees to reciprocate the gesture of appreciation by the Authority as the Federal Government expects them to bear in mind the copious role the Maritime sector plays in the realization of the administration’s Economic Recovery and Growth Plan [ERGP], hence they should put in more efforts. 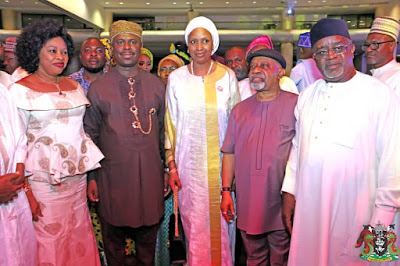 The Hon. Minister of Labour and Productivity Dr Chris Ngige while applauding the Authority for aligning with the objective of the Federal Government in the area of improved welfare and appreciation for the workforce stated that the present administration would continue to invest assiduously in the welfare of the Nigerian workers in the development of the nation. This he further stressed has been exemplified through the recent approval of the National Minimum Wage and resolution of Industrial disputes.
The Chairman Board of Directors of the NPA, Emmanuel Adesoji Adesoye in his brief remark stressed that the event was part of the resolution of the board in promoting Staff welfare which it believes would boost efficiency and commitment to the development of the Maritime sector in Nigeria. He charged the Awardees to further exhibit exemplary conduct and not rest on their oars.
Present at the colorful event were members of the NPA board of Directors, its Past Managing Directors and Captains of Industries within the Maritime sub sector. The event witnessed the presentation of various categories of awards to personnel who have shown exemplary conduct and a high level of professionalism to the growth of the Authority.

Pix 1: L-R: The MD NPA, Hadiza Bala USMAN presents an award to Sunday Oyeyipo for Best Practice Financial Reporting Unit of the Account Division during the NPA Long Service & Merit Award in Lagos, over the weekend.