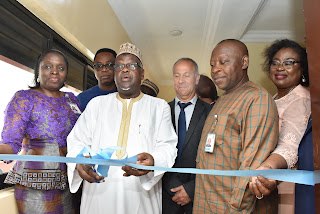 The Command, Control, Computer Communication and information otherwise known as the C4i Centre of the Deep Blue Project has commenced operations on a 24 hour basis at the Nigerian Maritime Administration and Safety agency, NIMASA.

The C4i Centre located at the NIMASA Maritime Resource Development Facility in Lagos is to serve as the Command and Control Centre for the deep blue project where tactical and strategic decisions for the operational workflow of all the platforms of the project will emanate from.

The centre is equipped with alert setting capabilities, Coastal Automatic Identification System (AIS) and SAT AIS signals all over the world, liaison with some international security networks for access to database for vessel movement, ability to monitor vessels movement  from 6 years backwards,

During the opening of the centre, the Director General of NIMASA, Dr. Dakuku Peterside stated  the Centre is in line with the Federal Governments Deep Blue Project initiative, geared towards the realization of a safe and secured maritime domain in Nigeria.

Dakuku further added that to realise this laudable initiative, the Agency has trained some personnel, including staff of NIMASA who will man the control centre, which will bring to an end the nefarious activities of those perpetuating crimes in our waterways, through monitoring and intelligence gathering.

In this security mechanism, the C4I operational centre stands as the central nerve from which all actionable information needed by all other components of the project emanate. The centre will serve as the base for situational intelligence for the Deep Blue Project, with 40 personnel broken down into Operators, Intelligence Officers and Shift Supervisors manning the centre the DG said.

The DG who was represented by the Executive Director, Maritime Labour and Cabotage Services of NIMASA, Mr. Gambo Ahmed disclosed that the Deep Blue Project initiative was designed to enhance safety of lives at sea, enforce implementation of maritime regulations, and prevention of illegal activities in the Nigerian Exclusive Economic Zone EEZ, the Niger Delta black water area and inland waterways inclusive. This he said will be through the aid of the usage of a wide range of sophisticated air, marine, and land based assets.

The efforts and resources that have been committed to the project show the seriousness and commitment of the Agency and the Nigerian Government to the course with every step taken inching us closer to the vision of a safe marine environment that will engender improved maritime activities, wealth creation and economic development for our dear nation, he said.

While assuring stakeholders in the sector of better days ahead, he commended the Management of the Homeland Security International (HLSI) on the professional expertise demonstrated so far, and charged the operators, of the C4i centre to realize that the success or otherwise of the centre depends largely on them; hence they should give it the commitment it takes to realize the objectives of the Deep Blue Project.

On his part, the Managing Director of the HLSI, Mr. Haim Ben Noon described the C4i Centre as the Heart and the Brain of the Deep Blue Project adding that the centre will help detect all forms of illegalities on the water ways and also commended the Deep Blue Project initiative of the Federal Government.

The C4I Centre is a component of the deep blue project. The project involves personnel from the Nigerian Army, Nigerian Navy, Nigerian Police, Department of State Services and officers of NIMASA. Aside of the C4i operational centre, the deep blue project also involves the use of special mission aircraft, special mission vessels, armored Vehicles and a 350 man maritime security intervention unit for effective manning of the Nigerian maritime domain.