The Nigeria Customs Service Federal Operating Unit (FOU) Ikeja, has made various seizures of contraband products in the first quarter of the year.

The seizure includes 180 bags of rice concealed in a Dangote Cement silo truck along the Shagamu area of Ogun State.

The Area Controller Mr. Aliu Mohammed disclosed this to journalists saying the driver ran away having nothing to lose. 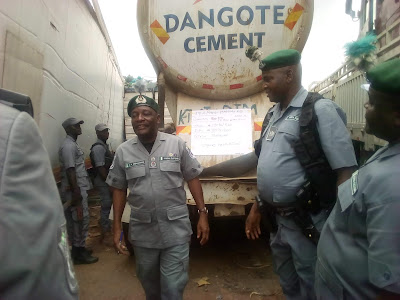 Comp. Aliu Mohammed who had recently received a merit award from the Nigeria Food and Drug Administration Control Agency (NAFDAC) said the investiture spurred him and his men to work harder to battle smuggling and other societal ills beseiging the country.
The Comptroller said that the Dangote silo was the first of it's kind to be seized as a means of conveyance used in smuggling.

When asked what would be the fate of the rice, he said they would be distributed to IDPs and orphanages across the nation. 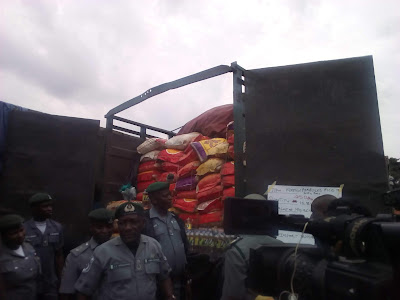 Educating journalists on standard procedures for seizures he said the law states any container carrying contraband, the goods should be  seized while the driver and the means of conveyance be released.

Howbeit, any vehicle carrying concealment both the contents and means of conveyance should be seized.

When asked how the Nigeria Customs intends to stop the dangerous Importations across the 1400 unapproved routes and over 100 border posts, the Controller affirmed that even America can not stop smuggling it can only suppress it.

Comptroller Mohammed confessed that they engage several methods such as allowing the suspects to have their ways through the unapproved routes and store the goods in Warehouses. When they gather intelligence reports about the location, they move in and seize.

According to him, Section 8 of CEMA gives the Service the power to burst into any suspected area even without warrant and make seizures of contraband goods.
Conceiled codein without NAFDAC registration number was also seized. Mr. Mohammed said:

"Since it has no NAFDAC number you know that it is fake.

"Any drug that find its way through the border without NAFDAC number you know it is not a good drug.

"But we are still going to send it to NAFDAC for analysis," he concluded.
About 113 exotic cars were also apprehended with Duty Paid Value of N1,339,088,544. Of the cars 60 are detained while 53 are already seized. 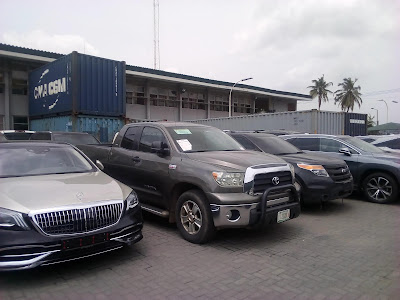 The Customs Area Commander (CAC) FOU, Compt. Aliu Mohammed showcased the seized goods to journalists saying that most of the seizures were made along with concealment of Tramadol which was still under investigation with NAFDAC