Group Managing Director of the Corporation, Dr. Maikanti Baru, made the pledge while commissioning the Lagos Midstream Jetty (LMJ) at the Apapa Harbour in Lagos recently.

“NNPC will continue to support all players in the downstream sector of the Oil and Gas industry towards efficient product supply and distribution across the Country,” he stated.

Reiterating the Corporation’s commitment to continued collaboration with the private sector, Dr. Baru urged private companies to develop innovative and profitable solutions that would not only aid the development of the Country but also ease the way of doing business.

He charged the private sector to continuously look for opportunities to partner with the public sector to enable the realisation of the Country’s economic goals.

November 10, 2017
Sandra Ukele
The Nigeria Customs Service Apapa Area Command has recorded a revenue balance of over N288b naira between January and October 2017.
This sum shows an increase in the corresponding period of 2016 which recorded over N240b naira between January and October of the accounting year. This essentially means the Command witnessed an increase of over N44b naira, depicting the assiduous work ethics of the government revenue-collecting Agency.
This increase can be attributed to the dynamic and sterling leadership prowess of the Customs Area Controller, Comptroller Jibril Musa who firmly insist on and maintains the implementation of all strategies and blueprints devised by the Command to block all revenue leakages while enhancing trade facilitation and security.
Moreover, the command has continued to engage in painstaking and diligent scrutinization of all documents, insistence on thorough 100% examination of profiled cargos that need same, implementation of the Executive Order on Ease of…
Post a comment
Read more 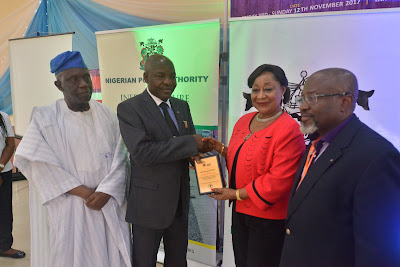 The Managing Director of Nigerian Ports Authority (NPA), Hadiza Bala Usman has informed all relevant Stakeholders in the Maritime sub Sector and the general public of the readiness of Management at investing resources in the area of Capacity Building and an efficient Port system towards the growth of the nation’s economy and global industrialization. According to her, Developing Nations of the World have come to the realization that Industrialization is a channel through which a nation’s economic recovery short and long term is dependent upon. To this end all hand must be on deck by all concerned towards finding a long lasting solution to these perennial problems facing our nation in the area of starvation, diseases and unemployment amongst others. Hadiza made this  remark at the NPA’s Special Day during the ongoing 2017 International Trade Fair organized by the Lagos Chambers of Commerce and Industry at the Tafawa Balewa Square Lagos with the theme ‘’Promoting Industrialization For Ec…
Post a comment
Read more
More posts