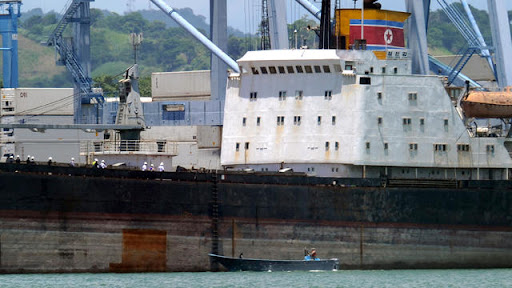 The United Nations Security Council has banned all nations from allowing 4 ships transporting prohibited goods to and from North Korea to enter their respective ports. Making this known to journalists at a briefing of U.N. member states on Monday, Hugh Griffiths said port bans has been placed on the 4 ships. Griffith's who is the head of panel of experts investigating the implementation of U.N. sanctions against North Korea confessed, "this is the first time in U.N. history," that the Security Council committee monitoring  sanctions against Pyongyang has prohibited ships from entering all ports. The 4 cargo ships are identified as Petrel 8, Hao Fan 6, Tong San 2 and Jie Shun. Griffith's confirms the 4 ships were officially listed on Oct. 5 "for transporting prohibited goods." This follows a U.N. Security Council resolution passed on Aug. 6 authorising port bans. The resolution  which comes on the heels of N.K's first successful tests on inter
Post a comment
Read more
More posts