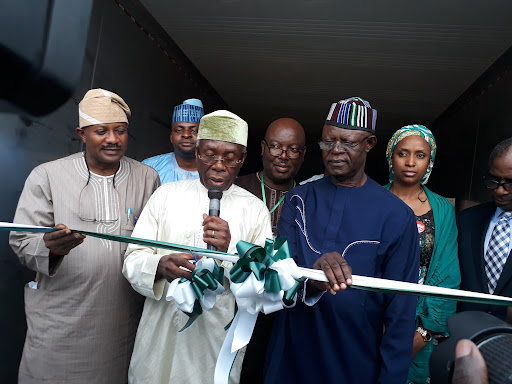 Sandra Ukele With the outcry of food scarcity in the country the Minister of Agriculture, Chief Audu Ogbe has formally flagged off the export of 72 tonnes of yam to Europe. Speaking during the flag off of the project at the Lilypond Container Terminal, Ijora, Lagos, Chief Ogbe said he considers the ceremony a giant leap in the country’s quest to grow the agricultural sector towards diversification of revenue base of the nation and conservation of foreign exchange by limiting citizen’s appetite for imported food. Audu affirmed, “The 72 tonnes is going out in three containers but this is just the beginning; more will follow. There is demand in China, everywhere where Nigerians are. Until we stabilise the economy through serious work there will never be peace and stability,” he said. While emphasizing the need for farmers to ensure quality control, Ogbe appealed to exporters to ensure that their produce met global standards as Nigeria can no longer afford the embarrassment of product rej…
Post a comment
Read more

MOTHER CRIES OUT TO IGP OVER GRUESOME KILLING OF CHILD

June 30, 2017
Sandra Ukele
It has been revealed that one Mrs Philomena Odama has filed a petition to the Inspector Genaral of Police through Lady Rose Mbata and Co. on culpable homicide by Alhaji Usman Adamu in Abuja recently.
In a statement signed by the force public relations officer CSP Jimoh Moshood on thursday, the complainant who is the mother of the deceased alleged, among other things,that her daughter Miss Joy Odama, a 200-level  student of Department of Mass Communication, Cross River State University of Technology died  mysterious  in the flat of Alhaji Usman Adamu located at Ibro Quarters, karmo, Abuja on 21/12/2016.
Mrs Odama stated that on 18th December, 2016, one Miss Elizabeth Okpata James approached her late daughter and pleaded with her to escort her to the house of Alhaji Usman Adamu in the company of another girl named Martha Hassan.
That she, Philomena Odama (the mother) later met Alhaji Usman Adamu who promised to offer her daughter a job with the Nigeria Security and…
Post a comment
Read more
More posts