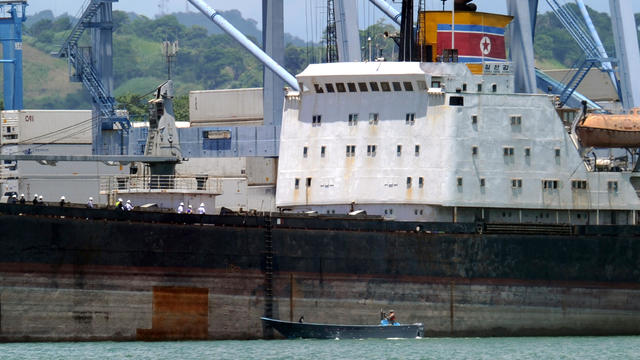 The United Nations Security Council has banned all nations from allowing 4 ships transporting prohibited goods to and from North Korea to enter their respective ports.

Making this known to journalists at a briefing of U.N. member states on Monday, Hugh Griffiths said port bans has been placed on the 4 ships.

Griffith's who is the head of panel of experts investigating the implementation of U.N. sanctions against North Korea confessed, "this is the first time in U.N. history," that the Security Council committee monitoring  sanctions against Pyongyang has prohibited ships from entering all ports.

The resolution  which comes on the heels of N.K's first successful tests on intercontinental ballistic missiles capable of reaching the U.S. also bans the country from exporting coal, iron, lead and seafood products. The goods are estimated to worth over $1 billion about one-third of N.K's estimated $3 billion in exports in 2016.

It is believed Mansudae exports N.K. workers to countries, "for construction-related activities including construction for statues and monuments to generate revenue for the government of the Democratic People's Republic of Korea- the country's official name.

Griffiths suggests Mansudae, "has representatives, branches and affiliates in the Asia-Pacific region, all over Africa and all over Europe." Without elaborating, he added: " they're doing an awful lot more than producing statues in Africa."