The Nigerian Customs has yet again unravelled the illicit importation of rifles into the shores of Nigeria. The rifles which made its way through Turkey are 470 pump rifles with container number CMAU 189817/8.

The Comptroller General Customs Col. Hammed Ali who expressed utter sadness at yet another development with same origin in a short space of time said a syndicate has been set in motion who would not relent in their efforts to bring deadly weapons into Nigeria.

He lamented the wilfulness of certain Nigerians to engage in such notorious acts while employing the same country of origin (Turkey) as its ally. Mr. Ali promised that the Nigeria Customs have developed a profile in tracking the perpetrators. In his words:

"It is sad that a trend has been developed. Despite all the seizures made in the last 6 to 8 months the syndicate have not relented in its efforts to ensure that it brings these deadly weapons into our country.

"And as we promised that having developed a profile of most importantly items coming from Turkey the Comptroller of Tin-Can Ports, Compt. Bashir Yusuf has insisted on a 100 per cent physical examination of any container that comes from that source and luckily this time around another container came and was subjected to a 100 per cent physical inspection and the result is what you see on (the) ground." 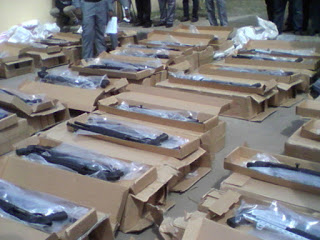 The CGC confirmed that through thorough investigations it was discovered that the dastardly act was perpetuated by Nigerians. He expressed optimism that the Customs would get to the bottom of the issue.

Col. Ali posed a question as to the intent of the rifles-importation asking: "Are the rifles meant for commercial purposes, are they meant to be given to groups  of insurgents, agitators as they call themselves or kidnappers?" he searched.

He declared that various security agencies such as the State Security Service (SSS) whose job it is to unearth the mystery would avail the Customs what their findings are.

On their part he said the Nigeria Customs have developed a profile to track the sponsors. The CGC affirmed that the Nigerian Customs would escalate the issue beyond the borders of Nigeria adding that since they have identified the country of origin (Turkey) a diplomatic meeting has been slated to hold between them and the Ambassador of Turkey tomorrow. 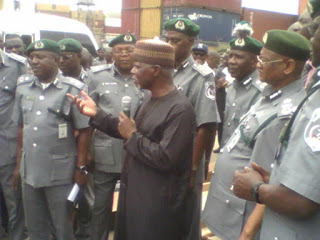 He highlighted that the President Muhammadu Buhari has already spoken on the matter at an international forum and the Customs officers concerned would hold a meeting with the President to discuss the way forward. He confirmed steps are underway to establish the cause and effect of the illegal import and find ways to stop it.

Col. Ali reiterated questions that have been put to him as regards why gloves were not worn while handling the rifles. The CGC had this to say:

"Let me clear this. With all my background as an investigator and former Police officer, these weapons as they are, they are not Crime-Scene Weapons. A Crime-Scene Weapon where murder is committed and you pick up the weapon, you subject that weapon to finger prints. That is when you make sure that nobody touches that weapon with his bare hands because that would contaminate the evidence you were looking for."

Mr. Ali stressed that the Nigerian Customs would use papers to trace the whereabouts of the imported items: who signed what, who wrote what and who moved what into the country. According to him these are two different scenes altogether.

Col. Ali also clarified another rumour making rounds saying why is the Customs in such a hurry to get the weapons out and not rather follow a lead: allow the container to go out, follow it and see where it ends up.
The CGC responded:

"Let me tell you the same intelligence we have, the same these people are using. If the Nigeria Customs Service allows the container to go out and the Police happens to stop the container the news would be different.

"So we want to be ahead of what is happening and this is it. We are getting more advanced and we want to block the leakeges and stop this illicit tranfer of riflles into Nigeria," he said.

The rifles were falsely declared as plumbing pipes by the importers.