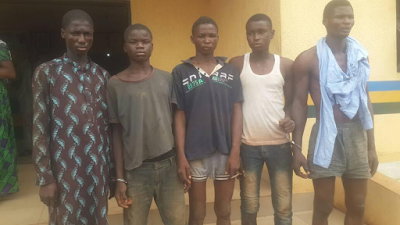 Notorious hoodlums have raided the residence of a hotelier Chief Moses Akanni Famuyiwa the Director of Mafland Hotel and robbed him of his money and other valuables.

The rogues who stormed into the room of one of the victims wives held everyone captive. The victim was stabbed and dispossessed of his bag containing cash and two mobile phones. He died on the way to the hospital from excess bleeding.

The spokesman for the Ogun State Police command ASP Abimbola Oyeyemi who disclosed this to newsmen on Wednesday, stated the hoodlums numbering about eight broke into the residence of one of the wives of  the hotelier around 5 a.m. and held everyone hostage.

ASP Oyeyemi iterated that on receiving the report, the  Commissioner of Police CP Ahmed Iliyasu gave orders to the DPO  Ewekoro Command, SP Vincent Egwuonu to get the hoodlums arrested within the shortest possible period of time.

They have all made confessional statements regarding their involvement in the murder of the deceased.

Meanwhile, the State Commissioner of Police  has directed the case be transferred to State Criminal Investigation and Intelligence Department for discrete investigation and possible prosecution of the suspects.

Photo Caption:
Picture of the killers.