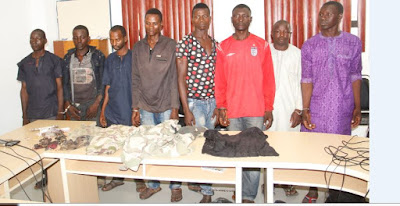 The Police Public Relations Officer at the Force headquarters Abuja, CSP Jimoh Moshood made this known in a statement to journalists on Monday.

The statement adds that the arrest was sequel to the IGPs order to curb kidnappings perpetrated on the Kaduna/Abuja highway, stop the violent crimes done against motorists and ensure a hitch free movement of commuters.

The statement further affirms the gang is responsible for the kidnap of a driver to the Chairman, Senate Committee on Police Affairs, 5 students of Ahmadu Bello University (ABU) Zaria and Nuhu Bamali Polytechnic Zaria among others.

Some of the victims have identified the suspects as members of the gang responsible for their kidnappings. Items recovered from the gang are: 3 mobile phones, 4 SIM Cards, a sum of ₦17,000 naira, cutlasses, 2 pairs of  Army camouflage.

The suspects have confessed to the crime, their statements chronicle their  individual roles in some reported kidnap cases perpetuated along the Kaduna/Abuja highway.

CSP Jimoh notes that they will be charged to court on completion of  the investigation and the operation will be sustained to ensure a hitch free movement of commuters on Kaduna/ Abuja highway.

Photo: Picture of  the kidnap gang.