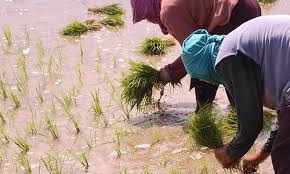 Sandra Ukele
In a bid to stop rice smuggling from the land borders of the nation, the Nigeria Customs Service (NCS) and the Rice Farmers Association of Nigeria (RIFAN) have signed a Memorandum of Understanding (MoU).
The disclosure was made by the President Rice Farmers Association of Nigeria (RIFAN), Alhaji Aminu Goronyo, in Abuja recently where he revealed that though a ban had been placed on the importation of rice from land borders since April 2016 with the exclusion of import from Export Processing Zones smugglers still thrived in the unscrupulous deal.
According to tests conducted by NAFDAC on rice samples smuggled through land borders these were unfit for human consumption, making them only suitable as animal or fish feeds.
Mr. Goronyo said, “Ninety-nine per cent of rice smuggled through the land borders were unfit for human consumption,” he said.
Goronyo iterated that the Comptroller-General of Nigeria Customs Service, Col. Hameed Ibrahim Ali (rtd), had spoken recently at a joint meeting with RIFAN and Customs officials that rice importation remained banned through the land borders.
The RIFAN President said to ensure effective monitoring of the land borders, the Comptroller-General has approved a 12-man implementation committee to be headed by Assistant Comptroller-General, Alino Dangaladima.
He said Customs promised to continue to ensure the restriction of rice import through the land borders to boost local production.
He said that the Comptroller-General agreed that there was need for total ban on rice importation and effective monitoring of the land borders to stop the activities of the smugglers.
The RIFAN president added that the customs boss reinstated that any attempt to import rice through the land borders would be resisted, saying the position remain unchanged.
He said the customs told them that it had deployed more officers and men to borders to enforce the order.
The President RIFAN also stressed Nigerian Customs has also re-organised its anti-smuggling patrols to provide additional capability, to enforce the ban of rice import through the land borders.
Goronyo said that the committee would be replicated at the state level to be headed by all state chairmen of RIFAN and its members would serve in the committee to be headed by the state comptroller of customs.
He said the enforcement has become imperative because the ongoing Rice Revolution undertaken by many state governments, and Strategic Interventions by the Federal Government Agencies was a step toward self sufficiency.
According to Goronyo, if adequate measure is not taken to stop the activities of the smugglers, it would have adverse effects on the bumper harvests expected from the rice revolution.
The RIFAN President commended the customs officials for taking the giant stride to reinstate the confidence of the RIFAN and assuring the farmers of adequate markets for their products.
He said that the rice that is coming into the country was very huge and not quantifiable, but because Nigeria has a big market one could not see the effect immediately, but gradually the local production would suffer for it.
Goronyo said that the annual rice production in Nigeria has increased from 5.5 million tonnes in 2015 to 5.8 million tonnes in 2017.
He said that in 2015, Nigerians spent not less than N1 billion daily on rice consumption, adding that while spending had drastically reduced, consumption had increased because of increased local production of the commodity.
“The consumption rate now is 7.9 million tonnes, while the production rate is 5.8 tonnes per annum,’’ he confirmed.