NDLEA TO NIGERIAN PORTS: "WE ARE MANDATED TO REMAIN IN PORT OPERATIONS."

The Nigerian Ports Authority recently issued a directive for the immediate evacuation of some government agencies from the ports.

This action is in line with the order issued by the Acting President of Nigeria Prof. Yemi Osibanjo on 24-hour port operations in Nigerian gateways. The NPA also seeks ways to reduce the number of agencies involved in processing goods at the ports.

However, the National Drug Law Enforcement Agency(NDLEA) is trying hard to stave off the order and continue its operations at the ports. It claims its agents are meant to remain in the ports despite the order. 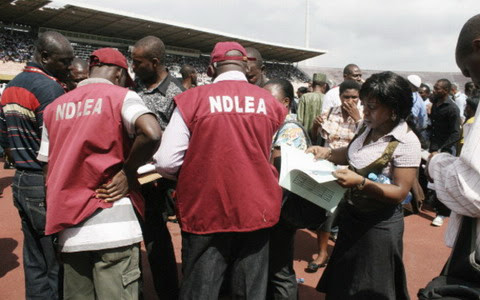 In a statement signed by its media spokesperson Mr. Mitchell Ofoyeju it claims the NPA boss Miss Usman made mention of 8 agencies that were to continue operations in the ports of which it (NDLEA) is one of such.
In an address made last week  on the implementation of six Executive Orders  which applies to port operations, Hadiza Bala Usman, the NPA  boss affirmed that only seven agencies were dutifully allowed to stay in the seaports.
She however reiterated that the NDLEA would be invited subsequently whenever their functions were required.
The NPA continues in with its directive that only seven agencies were streamlined to remain at the ports.

In another statement signed by the Principal Manager, Public Affairs, Ibrahim Nasiru, the agency confirmed its commitment to the implementation of the Executive Orders issued by the Prof. Osibanjo.

The statement stated in part: “The NPA has reiterated for the umpteenth time that it would enforce the Presidential Executive Order concerning the 24-hour operations at the nation’s seaports. The directive stated that only seven agencies are permitted to operate within the ports. These agencies are the NPA, NIMASA, the Ports Health, NCS, NIS, NPF and DSS.

“In this regard, therefore, the management of the NPA wishes to unequivocally state that any other agency that was not listed in line with this presidential order, should henceforth vacate operating from within the premises of the nation’s seaports.”