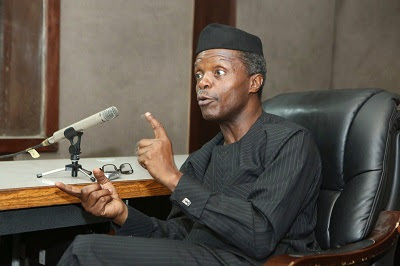 Ministries, Departments and Agencies (MDAs) have received progress directives from the Federal Government on the full implementation of the Executive Order 001, 2017 towards the promotion of transparency and efficiency in the business environment or face sanctions.

The warning is stipulated in a circular tagged, “Further Directives on the Implementation of the Executive Order 001, 2017 by Ministries, Departments and Agencies (MDAs)”, signed by the Head of the Civil Service of the Federation (HoCSF), Winifred Oyo-Ita and issued to all the MDAs of the Federal Government.

According to information contained in the circular it says, Acting President Yemi Osinbajo has directed expressive strategies for the full implementation of the provision of the EO-001, 2017 which stipulates that each MDA shall set up an Implementation Team for Executive Order No.001 of not more than five staff members to be headed by an officer in the Directorate Cadre.

“And that the progress of implementation of the Executive Order No. 001 shall be tracked and the performance of MDAs ranked and reported to the Presidential Enabling Business Environment Council (PEBEC) such that star performing MDAs will be recognized and those otherwise sanctioned,” the circular said.

To further empower the MDAs to implement the EO-001, 2017 initiative a Focus Workshop on the Operationalization of the OE-001, 2017 is scheduled to hold in 2 sessions per day on Wednesdays and Thursdays  starting from 28th June to 27th July 2017 at the Conference room of the Secretary to the Government of the Federation.


Moreso, the circular calls for a mandatory attendance for nominated officials. Ministries are therefore charged to hold in-house training for staffers and subsequently include other staff and agencies under their jurisdiction.