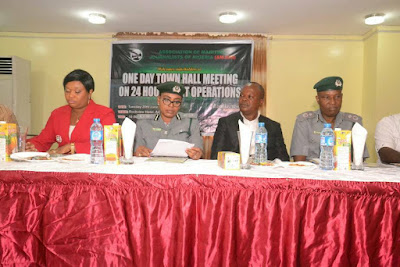 In preparedness to achieve the Executive Order given by the Acting President Prof. Yemi Osibanjo on ease of doing business and achievement of 24 hours port operations at the ports, the Nigeria Customs Service have insisted that advanced cargo manifest be submitted within 7 days before the arrival of the vessel to the nation's seaport.

This declaration was made public by the Comptroller General of the Nigerian Customs Service, Col. Hammed Ali (rtd) at a one-day town hall meeting organised by the Association of Maritime Journalists of Nigeria (AMJON). Col. Ali emphasized the advance cargo manifest would enable risk management profile and separation on time before ship arrival.

He said, "In order to achieve greater service delivery at the ports, there was the need to streamline the current import and export guidelines procedures.

The new guidelines according to the Customs boss, would focus on some of the issues causing inefficiency and delay at the ports.

Ali who was represented by the Customs Area Controller, Ports and Terminal multiservices Limited (PTML) Command of the service, Comptroller Modupeola Adeyanju Aremu explained that some of the new guidelines would impact directly on the operations of officers and men at the ports.

Harping on the actualisation of 24hours ports operation, the customs boss maintained that the service is positioned to implement the executive order saying that the impediment to the attainment remains the integrity and compliance of the trading public in ensuring proper documentation and honest declaration.

The customs top brass noted that the service remains the lead agency in cargo examination at the ports adding that under the new guidelines, cargo placement notice time for examination required by terminal operators would be reduced from the proposed 24hours to a maximum 12hours.

The ex-Army chief re-echoed that revised guideline requires the shipping lines to electronically transit advanced manifest to their consignments to the customs and Nigerian Ports Authority (NPA) as soon as the vessel depart its last port of call,pointing out that such practices would promote risk management,profiling and cargo placement for examination.
He stated, "in line with World Bank recommendation,the Federal Ministry of Finance has directed that the import document be reduced from 14 to 8 and export is from 10 to 7"

"The Nigeria Customs Service joined other Ministries,Department Agencies (MDA's) in making commitment towards the transformation of the business landscape in Nigeria as we focus on improving the Nigeria ranking in which we stood at 182 Trade Across Border particularly in the reduction of import and export time by up to 50% through strict adherence to international standard and practice"

There is no doubt that the Nigeria Customs Service has a pivotal role to play in our collective bid to entrench a more business friendly environment in Nigeria.

He added that the service has moved from manual long room procedures to automated ASYCUDA++ platform which supported the following electronic quintessential innovation and adaptation that have contributed tremendously to trade facilitation.

Also speaking at the event, Executive Secretary,Nigerian Shippers' Council,Barrister Hassan Bello noted that 24hours port operations is achievable; calling on all government agencies to work as a team.
Bello who was represented Mrs. Juliana Saka from the Compliance and Monitoring Department of the council , called on agencies operating at the port to compliment each other rather than competing.

He stated that the Standard Operating Procedures (SOP) launched by the council is a guide to all port users adding that the portal would also be integrated with customs formation.

Meanwhile, the president of AMJON, Mr. Ismail Aniemu said the event was intended to bring stakeholders together  and create a template for the actualisation of the executive order.

He added that the forum was mainly to fathom a way out of the myriad of problems bedeviling the ports to make the process a success.

As part of activities to comply with the 24hrs ports operations, the Nigeria Customs Service( NCS) Tin Can Command have started implementing the Federal Government Order on Ease of Doing Business.


Our correspondent who visited the Tin Can Island Customs Command of the Customs sited a directive from the Customs Area Controller, Comptroller Bashar Yusuf mandating all Unit Heads to map out strategies in implementing the 24hrs Ports operations in the command.

A source from the command said the CAC directive is among others to prepare for shifts that will put officers on duty 24hrs round the clock.

Only yesterday, the Comptroller General of the Service, Col Hameed Ali, during a town hall meeting on how to achieve the 24 hrs Port Operations, organized by the Association of Maritime Journalists of Nigeria ( AMJON) requested all importers to summit their cargo manifest to customs 7 days ahead ,even before the ship leaves its port of call..

Comptroller Bashar Yusuf of the Tin Can Island port is one of the Service arrow heads who is bent on enforcing all government directives, as well as facilitating trade.